Learn more about all of Nashville’s many fantastic neighborhoods right here! 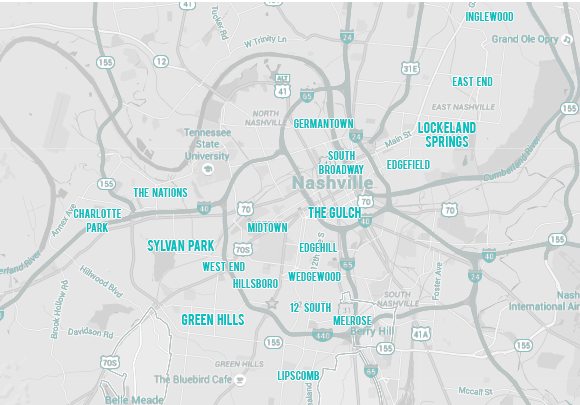 Nashville, TN is a rich center of culture, business, and art in the South. Often called the Athens of the South, it continues to draw individuals from all over the country… and even abroad! According to the most recently-released statistics, as many as 80 people are moving into Nashville a day, and within a few years, the city is expected to have grown by another million residents! So if you’re looking for Nashville real estate or want to browse local homes for sale, that means there’s a lot of competition. Unlike some websites like Trulia and Zillow, this website gets its home listings feed directly from the Middle Tennessee MLS, meaning we show you homes much faster– our data is updated every 15 minutes or less, letting individuals searching for homes find homes as soon as they hit the market, and not days or weeks later!

The Hottest Neighborhoods in Nashville TN

One of the primary draws of Nashville is its collection of amazing, unique, and lively neighborhoods, each of which have their own unique personalities and lifestyles. Many Nashville neighborhoods are centralized around specific thoroughfares so that even in the heart of the city, you can feel ‘small-town’! Great neighborhoods like Sylvan Park, Hillsboro Village, and 12 South are known for their close, small-town feel. But if you love big-city, urban living? The downtown neighborhoods of the Gulch, South Broadway, Germantown, and Midtown offer high-rises, downtown views, and fantastic nightlife and entertainment options. But no matter what neighborhood you’re looking to live in, Mary O’Neil can help you!

Downtown Nashville is full of excellent neighborhoods—each of which sports its own vibe and personality. If you’re looking for a location in the heart of the city, then downtown Nashville is where you want to be. You’ll be within walking distance of Bridgestone Arena, Nissan Stadium, and Broadway Ave (Nashville’s main strip, with honkey-tonk bars and lots of neon). However, keep in mind that parking and traffic are typically pretty intense due to tourism, and you’ll be paying a pretty penny to live in this particular location.

The Gulch is the fastest-growing neighborhood in Nashville, and is the heart of Nashville’s downtown, this area boasts easy access to the interstate and some of the best new restaurants and bars in town. Housing in the Gulch is almost exclusively condos, usually newly-constructed high-rises. A word of caution: the cost of living continues to rise as The Gulch becomes more popular.

Midtown is the broad area just south of Downtown, and includes Vanderbilt, Music Row, Hillsboro Village, Belmont, Centennial Park, and other small boroughs. Homes in Midtown are still expensive, but include both traditional homes and condos, and have many tree-lined streets and boulevards with easy walkability to restaurants, nightlife, shopping, and in some cases, are also walkable to downtown.

Music Row is where many young people choose to live (fun fact: it’s home to some of the most prominent recording studios in the world). With that said, if you are looking to buy a house, this area may not be the best place to do so. Many of the neighborhoods are filled with rentals, occupied by college and grad students. Finding a home that’s for sale can be tricky.

East Nashville is everything east of I-24. It includes popular neighborhoods such as McFerrin Park, Greenwood, Lockeland Springs, Maxwell, and Eastwood. While once considered a rougher part of Music City, the past decade has seen giant renovations and business growth on the east side. Through neighborhood revitalization, the focus of East Nashville has become more community-centered. Musicians, artists, and creatives have flocked to this neighborhood, which is now a haven for arts and culture.