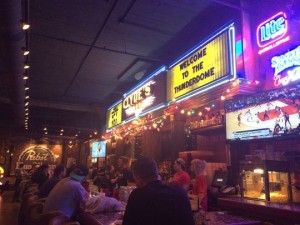 Foosball, ping pong, shuffleboard. All of the bar games of years past are growing in popularity again. And, sure, you could head down to Broadway Brewhouse to play a little… aren’t you in the mood for something new? We know we are. Enter Clyde’s on Church, a new dive-bar concept with plenty of gilt which just opened in Midtown.

Don’t be scared by that ‘dive bar’ label: this venue is clearly a labor of love. The owners flew in a famous street painter, Jasper Patch, to paint some amazing murals on the far wall, which include a lot of nods to cult classic films and shows. They’re so beautifully-rendered that they look like photos.

Hungry? Check out Clyde’s amazing appetizers, fresh salads, homemade soups, crazy-good sandwiches and certifiably INSANE smoked pork, brisket and chicken, always cooked low and slow in our smoker. Looking for great drinks? Enjoy custom cocktails, powerful punches, killer craft beers and more. They held their grand opening on March 7th of 2016, just yesterday. Wanna check it out? Clyde’s On Church is located at 1700 Church Street Nashville TN 37203. According to reporters at the Tennesseean, the food is pretty dang stellar, and they managed to nab the manager of Taco Mamacita, another fun place for drinks near Vanderbilt and Midtown. 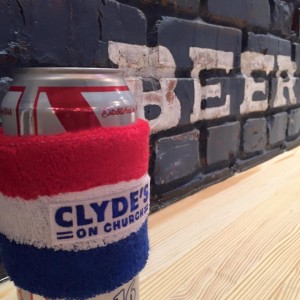 As proof that they know their crowd, they’ve adjusted the traditional happy hour concept: during their happy hour times, Clyde’s will be playing sweet vinyl classics all from their lovingly-restored jukebox. Prices at the happy hour range from $0.50 off of their awesome draft beer selection, $1 off all of their home made specialty drinks, and $3 well drinks.

According to their general manager, there’s more than enough to do for a few hours, even for a bigger group: there are large built-in booths and boardgames, private ping pong areas, complete with safety nets to protect from runaway balls… it seems like you can’t go wrong!

This is only one of many planned new restaurants and nightlife areas for the Vanderbilt/Midtown area; the new condo complex north on 21st will yield shopping and restaurants on the ground floor, the iconic Midtown Noshville is going to have new occupancy, and 2016 will be a big month for openings. We’re honestly holding out for some great boutiques and shopping!